The night is still, the streets lie sleeping,
here is the house where my sweetheart lived;
long ago she left this town
yet here stands her house, on the same place.

And there stands a man, staring into the sky
who wrings his hands in violent grief.
I look into his face and shudder
as the moon reveals a reflection of my own.

You nemesis, my very double!
Why do you mimic the agony of a love
that lived in torment in this very house
so many nights, so long ago?
(Heinrich Heine, trans. Hoffman) 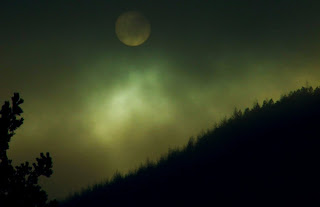 On the first night of the full moon, a man looks out of his window. The interplay between moonlight and moon shadow is so compelling he feels he must somehow become part of it. He steps out onto his porch, looks above him at the view through the leaves of an old maple. The broken light draws him in. He begins to walk, eyes on the moon, mind in contemplation of the exuberance he feels when he steps out of the fractured light peeking through leaves, buildings, alleyways, into the full face of the moon. As he walks he begins to feel invincible, larger than life. The moonlight infuses his veins, rays reach finger-like into his very core. He is become Nature and is filled with an overwhelming sense of luminescence and joy.

Time passes unheeded until some annoyance nags at the corner of his consciousness. He pushes it aside. Still it intrudes, overcomes the luminescence. Drawn out of his moon reverie, the man notices his surroundings. His old neighborhood…and across the rutted street, he sees the house of a former love. His infused light darkens; his feeling of elation dims; he realizes the presence of The Other.

The Other stands in the shadow of the house, baying at the moon. Out of curiosity, the man crosses over. He stands some distance from The Other and realizes that The Other is not baying at the moon, but rather sobbing, shouting, howling at empty windows, relating in his grief a tale of love and deceit.

The light of the moon is broken; its shards stab into the man’s own memories of this house. He turns to The Other. The eyes that greet him are his own; the keening voice, his own. The old brown suit he wore only because she had expressed admiration, the brown suit he had torn and thrown in the refuse bin when he realized her betrayal, here again in pristine newness.

And now the light has turned to anger, to rage, to revisited memories of deception, dreams broken, love betrayed. The man is overcome. He howls at the moon and the desolate house; he howls at the memory of lost love and still it is not enough. The rage bursts forth, renders him, splits him, emerges into an entity all its own…..

News Item: Early this morning another body was found in the Old River District. The police are quite perplexed as the body appears to have been mauled by a large animal. It is unlikely that such an animal is indigenous to this area. Police are advising avoidance of the area and are asking that anyone with information relating to this case step forward.
-------------------------------------------